On the hunt for a great vegan pancake? We’ve got you covered! Our kids gobble up these sweet potato pancakes with almond milk whenever they are made in our house and we love to top them with toasted pecans. 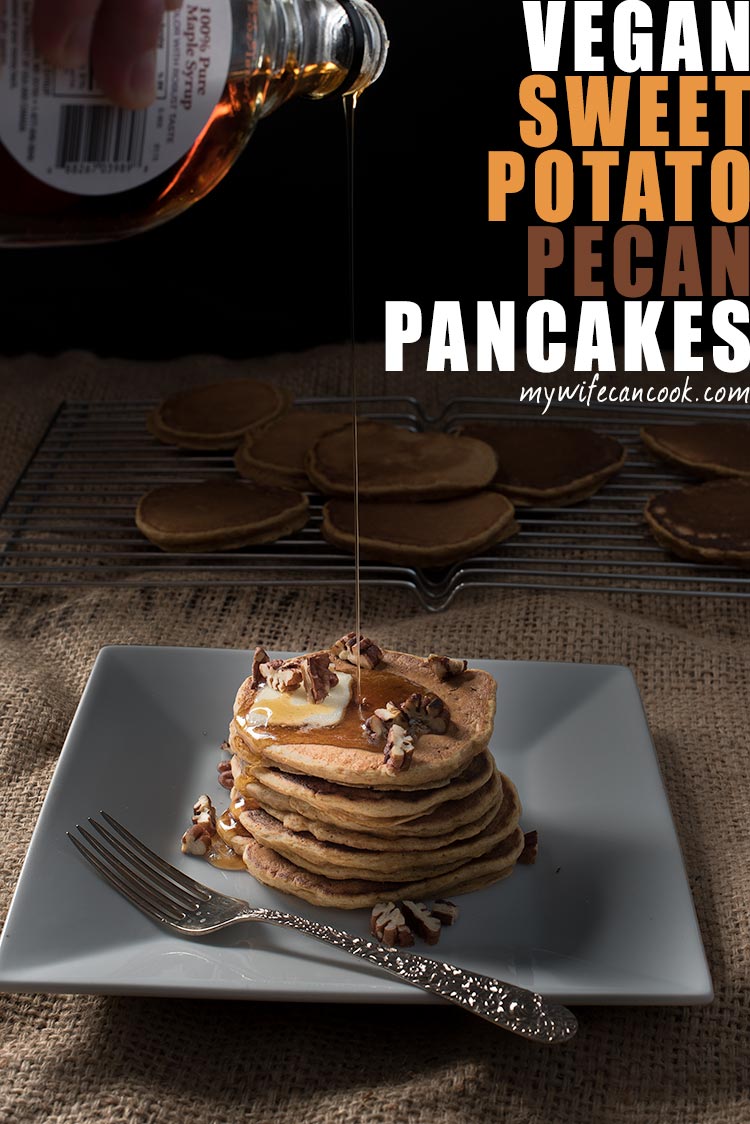 Brunch is one of our favorite meals.  And pancakes are a family favorite! And even though no one in our household practices a strict vegan diet, we have extended family and friends that do so we’re always in search of inspiration for new great vegan recipes.  Plus, sometimes the milk and eggs get consumed and a store run isn’t on the agenda.

Don’t get me wrong, we love traditional pancakes. Frequently, we make my grandmother’s buttermilk pancakes which are delicious.  They are a simple pancake, turn out perfect every time, and our kids love them. However, like anything else, it’s good to break out of the norm and try something new.

We find sweet potatoes are a nice twist and give pancakes an additional sweetness which seems to work well for vegan pancakes. It’s true that making vegan sweet potato pancakes definitely involves a few more steps and few more ingredients, but is definitely worth it.  Plus, it’s perfect for when your vegan family or friends (or those with dairy or egg restrictions) come over for brunch. 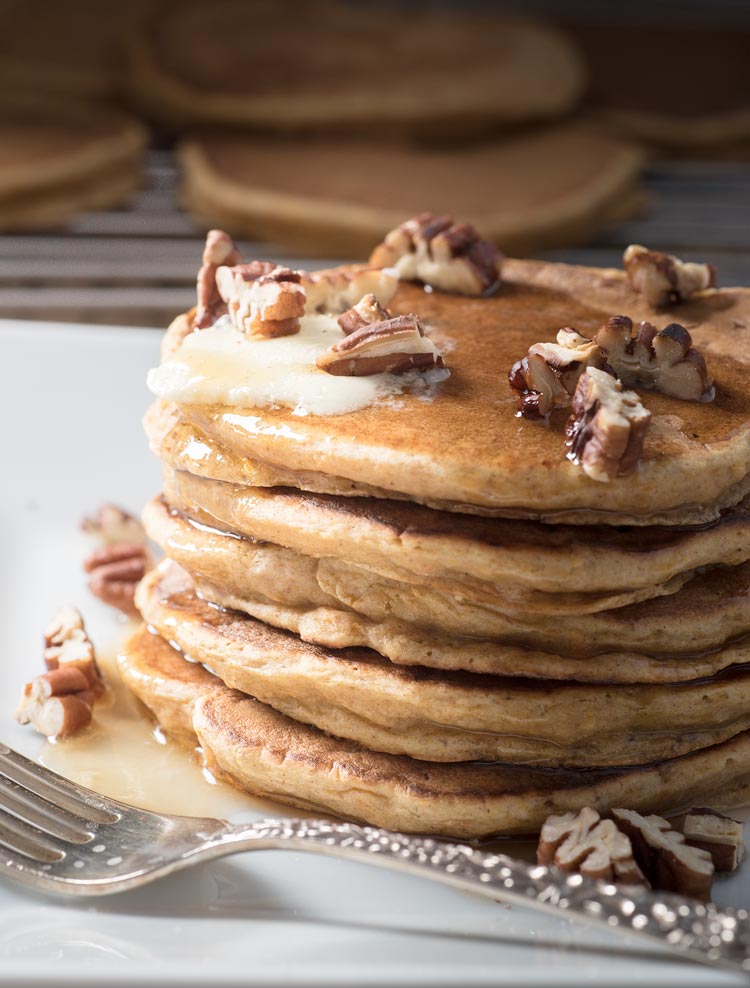 This recipe inspiration started years ago. I went to brunch at a restaurant that served delicious sweet potato pancakes with a compound butter that had pecans and honey in it.  So good!  Apparently, the restaurant was even on the Rachel Ray show $40 a day. So naturally…

Almond Milk as a Dairy Substitute

…We started our own recipe testing, drawing inspiration from their version, but with the hopes of turning it into a vegan pancake recipe. We sometimes use almond milk as a dairy substitute so we tested out a batch of the pancakes with almond milk and were pleased with the result.

Almond milk is really a great option for pancakes for anyone who is lactose intolerant because that one ingredient usually allows you to make a delicious dairy free version. Plus, there are many health advantages to almond milk. We used Silk Almond Milk which is a popular brand, but we’ve used others that have also worked well.

Going all the way Vegan

Going dairy-free is a great start, but you still need to eliminate the egg. To do this we added some flax and a little more almond milk. The almond milk we mention above and flax is something we tend to use a fair amount in baking, like when making things like this flax homemade cornbread. And that’s really it…2 easy ingredient substitutions can take you from traditional pancakes to vegan pancakes.

Sure, I might be biased, but I think we created a vegan version that is just as good as the original I had in that recipe years ago.  Obviously, we skipped the compound butter which is amazing, but I love having these sweet potato almond milk pancakes with syrup and toasted pecans! I prefer toasted pecans rather than just using them straight out of the bag or shell.  It’s a little more work, but the toasting really brings out the flavor. So worth it! And they have tons of other uses; they are perfect on salads like our fall pear salad.

Toasting pecans is super easy. Basically, just throw your desired amount of pecans in a pan over low heat and toast for 5-6 minutes, stirring occasionally.  For this pancake recipe, feel free to toss the toasted pecans into the pancake batter and cook (or add into some of your pancakes right after pouring the batter in the pan).  Our kids disagree on whether they should be in the pancake, so to simplify, we just sprinkled them on top with butter and syrup.  You could also add a sprinkle of powdered sugar.  Or a huge pile of whipped cream like Leslie Knope. 🙂 But, if you are going vegan, choose your options carefully. 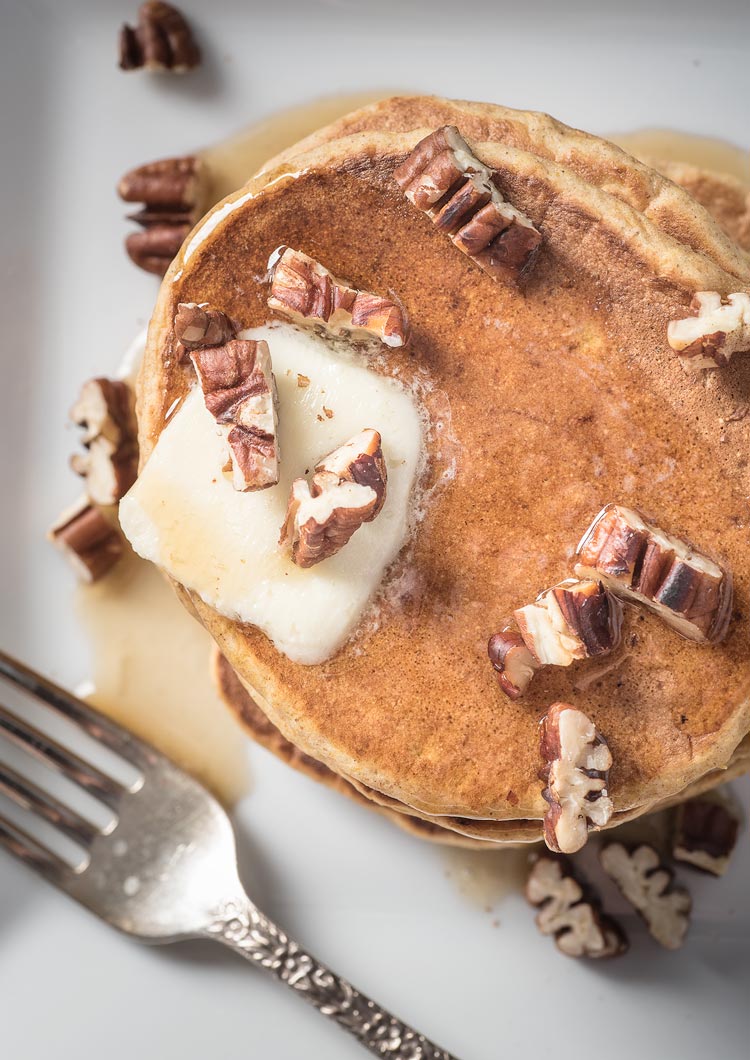 As mentioned above, the almond milk is key to making vegan pancakes, but we’ve made this recipe before with cow’s milk and those pancakes were great as well.  So, if you don’t eat vegan or have dairy allergies, feel free to use regular milk.  And I am sure you could easily use your favorite gluten-free flour to make this recipe vegan and gluten-free if you wanted.

Sweet Potatoes in the Instant Pot

We just threw them in for 15 minutes on manual and then let the Instant Pot do 5-minute natural release.  It was faster than I have been able to roast them in the oven and I cooked several to mash and freeze for later uses (pancakes and breakfast cookies).  In the past I have used the oven (although it takes more like 45-60 minutes in my experience), so feel free to use your normal method.

Okay, on to the recipe: 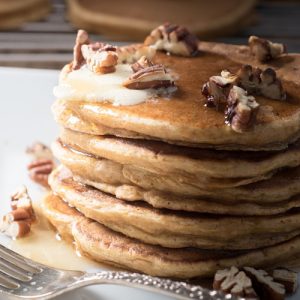 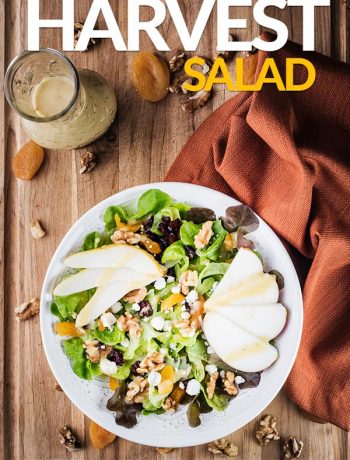 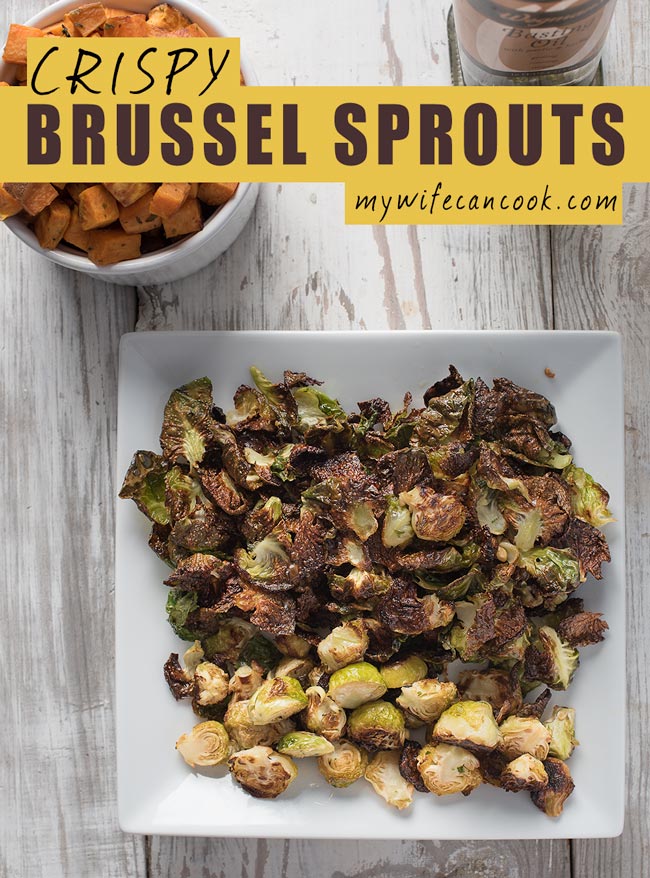 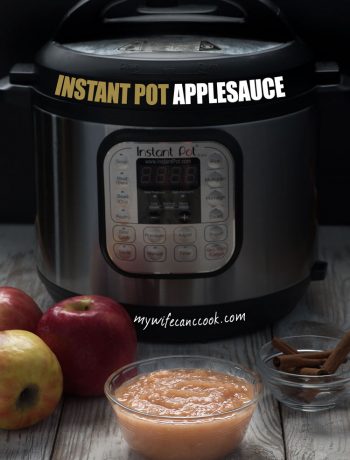